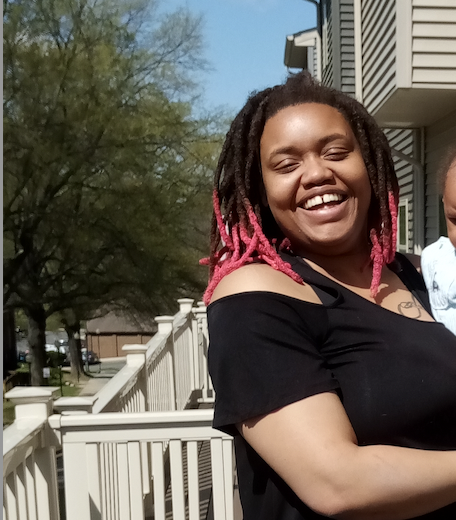 Come sit and chat with me (DCFYI’s Intern) and Leslie, a longtime DCFYI participant! Here we discussed DCFYI’s impact on her life in general and more specifically her thoughts on rituals and the people DCFYI has brought into her life. Stay tuned for more blogs highlighting different DCFYI participant and volunteer stories!

Leslie: My name is Leslie. I'm 24 and I'm a Certified Nursing Assistant.

I: When did you start participating with DC FYI?

L: I don't have an exact date, but I'd say I've been with them for about five or six years.

I: Okay. When did it become important to you and what made you realize that it was?

I: Are there any special people you have met through the program? And can you elaborate on how this program provided this person for you or these people? I know you said that you have a mentor.

L: Yeah, I mean, Maggie, she was my mentor since, I want to say, 2017, and we met each other after we had both been struggling to find someone to mentor and for me to find a mentor, and she had picked me up off the random for one of the Christmas parties. And after talking, we realized that we liked a lot of the same things and it was easy to talk to her, so we decided to continue. And, yeah, she's been my mentor ever since. I have also met a couple of teens there that I still talk to outside of the program. One of them is actually my son's godmother. Her name is Charay. She was a part of the program way before I started going, but once we were in the program, we were cool. We were close, but outside of the program, our schedules never really aligned. But since having my son this past year, we got actually pretty close, and we still talk about programs and how we think we should, what sorts of events we should do, and stuff like that.

I: That's so cool! So what did you expect about DCFYI versus what you have actually experienced?

L: I expected it to be stuffy and not like, real, genuine people, because that's what I was used to growing up in the system, and my reality was very different. They were very genuine, very caring, very invested in making us see the best in ourselves. So that's what I would say.

I: Okay. And then the next part is a little bit about the rituals and traditions with DCFYI. So I know DCFYI has certain events that they do every year, but can you tell me what some of those events are and if one's your favorite?

L: My favorite is the, well, there are two that I know we do continuously, which are the birthday party and the Christmas party. And honestly, those are my two favorites. It's the one time I know everybody from over the years is going to be there, and it's also the time where you get to learn about new things from each other, so, like, what's been going on and all of that, especially if you haven't seen someone, like, a year or two. So I would say those two.

I: And then does having these set events or rituals make DCFYI feel more like family?

L: Definitely. I'm very particular about who I open up to and who I get close with. So the fact that it's always the same people, I mean, they add new students and stuff sometimes, but it's pretty much the same. So it allows me to get really comfortable and really get closer to people.

I: What are three words to describe your DCFYI experience?

L: I wouldn't say I have three specific words, but I would say that they definitely changed who I was from when I first joined to now. I was much more out of control, all over the place, still trying to figure out who I was, and they kind of helped me narrow it down and figure me out.

I: That's great it has been able to do that for you!